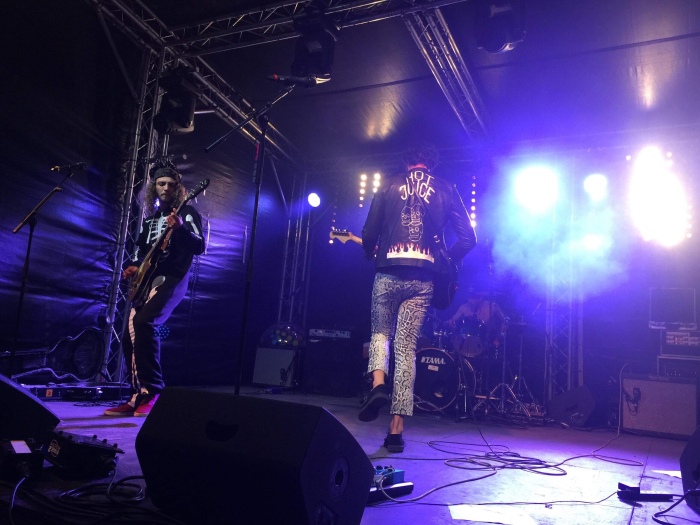 Starting just playing the bar scene picked up jersey interest with lead single Caution becoming a singalong for us pretty much everywhere we played also going on to win 2 competitions for Sunset Concerts and Weekenders song of the year and getting to play at both festivals, with over 4000 sat at the Sunset Concerts over one of Jerseys coasts looking over the largest beach. Soon after releasing Debut EP Caution closing 2018. On the first weekend of 2019 our next single caution was made BBC Intro CI Track of the week. Towards the end of January Hot Juice were given a night at upcoming venue ‘Horse and Hound’ called ‘Hot Juice Presents…’ in which we introduced the new and old artists of Jerseys Music Scene and then headlined the night. Hot Juice won the Jersey 2019 Battle of the Bands to start off to what was leading to a huge summer of our next single ‘Small Town Blues’ being named BBC Intro CI track of the week, playing the BBC Intro Live gig in Jersey, headlining the Channel Islands biggest festivals local stage at Weekender, running our own festival Brunopalooza for a charity. October we released our debut album ‘This Is What You Want.’ which is a mixture of blues, dirty rock and punk with a sprinkle of indie heigh got a great reaction including a BBC Intro CI whole show being used as an album release party, we have taken the album release onto playing in the South of the UK playing gigs in Southampton and Portsmouth. We have taken January out to work on new music and can’t wait to take it to the next few gigs, Playing some Local events at home and hitting the UK again.

“Hot Juice are a band that bring huge energy when they perform live. On top of that, their powerful sound translates into the recording studio and their debut album “This Is What You Want” is an absolute smash. They make it very easy for me to support them through BBC Music Introducing and as if that wasn’t enough – they are really sound guys as well.” Tim Hunter, BBC Music Introducing in the Channel Islands.

To get in touch with us please email hotjuiceband@gmail.com.

OR use any of the below thumbnails to all of our social media accounts.

‪Buzzing to be part of the #UploadFestivalCI‬ ‪18/19th April, Set times TBC! ‬ ‪So get yourself a few beers sit back and enjoy the weekend of live music coming straight to you from the CIs booming scene!! ‬‬ ‪#streaming #festival #StayHomeSaveLives ‬
‪Hope everyone is keeping well!‬ ‪If you’re already bored of self isolation get into our album ‘This Is What You Want.’ It’s on all streaming platforms (Spotify, Apple Music, Spotify etc, etc...)‬ ‪Take care all x‬ ‪https://soundcloud.com/hot-juice-29844810/sets/this-is-what-you-want‬ ‪#IsolationTunes #StayHomeSaveLives ‬#rockmusic
Happy Monday all!! Buzzing to announce we’ll be playing Friday 10th July at Sark Fest! 🔥💦 #weekender #festival #livemusic #rock #punkrock #jersey #channelislands #newmusic #summerfestival
Nice one to all who came down to @vanguard_dnb at @watersplashjersey on Saturday, was a belter as always!! 🌊 We’re gunna have a little gig break until May, but got some new tracks coming soon 🔥🔥
%d bloggers like this: